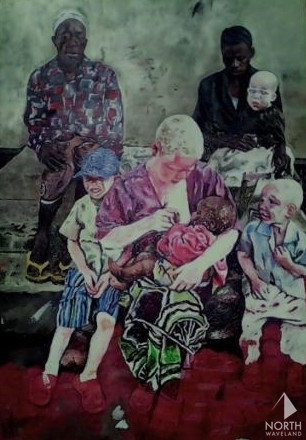 Ndzenyuy Godmark Fannyuy who’s artistically known as Godmark Fannyuy was born in the capital city of Buea Fako located in the southwest region of Cameroon at the foot of Mount Cameroon.  The city was founded by a hunter who named it “Ebe’eya” meaning “a place of happenings”. A city whose history is deeply rooted in royalty, resistance, and German colonization. Rich in natural resources, one of its most popular exports dating back as far as the 1800’s has been tea.

Godmark has a unique personality and often demonstrates a strong critical thinking approach in his works. As a creative and artist, he looks to the foundational components of the arts to create a signature style that is unmatched and self-identified as the liberal contemporary period.

In his own words: “I look to the world around me and a lifetime worth of experiences for inspiration.  As an artist, I look to communicate the respect of liberty and elevate the embracement of diversity in my works — this aspect if very important to me. As artists, it’s our responsibility to be our true selves to preserve the history and knowledge of our expressions as a timestamp which aids in the efforts to make a better tomorrow.  I was born in a region where albinos have been and continue to be marginalized.  This example of today’s sensitivity in our moment in time helped me to create the concept of “The Albinos” series, which focuses on the treatment and cruelty within our society.  The series has been well received throughout Africa and has achieved international acclaim through media and cultural distribution channels. This type of work went from my destiny to now my legacy, and I will forever be proud of that.”