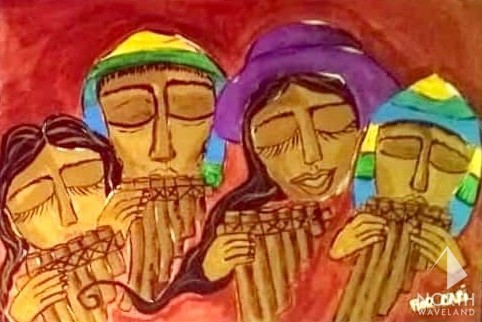 Florencia is from the city of San Salvador de Jujuy — locally known as Jujuy and pronounced “Hoo-Hooey”. Located in northwest Argentina, the city is recognized for being the most culturally indigenous in the region with a questionable date as to when it was founded. Known historical records date the city as far back as 1593 but others believe it was much earlier.  Having once a tumultuous past caused by Spanish invasion and attempts at colonization led to much destruction of the city.  Today the city stands tall as it has risen from the ashes and become a destination for its natural marvels, cultural aesthetic that is unique, and memorable festivals including its own Carnival.  Many thrill-seekers visit the city and surrounding areas for the giant salt flats of Salinas Grandes, the scenic landscapes of Calilegua National Park, and the colorful rock formations that are adorned with a kaleidoscope of natural colors.

Through her works, Florencia looks to be a reflection of her culture and her ancestral roots.  It has allowed her to hold tight to memories in an ever-changing world.  It can be said that each piece is a kind of rescue narrative that combines techniques that are compelling with the purpose of raising the value of Andean importance and appreciation.

In her own words: “I’m inspired by the drawings of the indigenous people, Andean music, and the sounds of local instruments played by the “Sikuris”. The Sikuris are musicians that popularized a genre of music that’s played using the Sikus or Zampoña — a wind instrument made with reeds. For balance the presence of the coca leaf is a representative of Mother Earth as an offering and culturally a sign of abundance. I also look to the “Pachamama” for enrichment and encouragement for my drawings and paintings.”

Be the first to review “Florencia Cari” Cancel reply