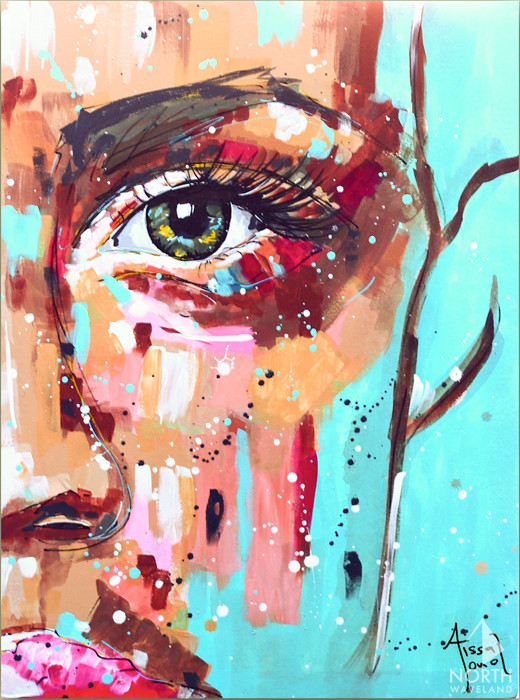 Aissa is from the southern city of Ouarzazate located in Morocco.  Locally known as Morocco’s “Little Hollywood” has been a place that has marveled and served as the backdrop for many movies, because of its rugged landscape and 19th-century palaces.  The “door to the desert” in its majesty is the perfect blend of history and glimpse of the future which includes solar farms that will power great stretches of Africa.

With a humble start, Aissa began selling his works to tourists that visited his hometown.  As his painting sold, it provided the right amount of encouragement and push needed for him to keep going, ultimately landing him the opportunity to study the Arts.  Although, schooling provided the depth needed to advance his art, it also separated him from the only foundational support he’d ever known in his family and friends due to the distance of the school in proximity to his hometown.  Feeling like an outsider, isolation and depression began to creep in which was followed by self-doubt which led to drug use as a form of escapism. After several small victories through exhibiting his work, it wasn’t until an artistic residency led by the ARKANE association that changed the trajectory of his life.  This opportunity provided the confidence needed to turn his life around and propel his career further than his dreams.

In his own words: “After noticing my interest in art, my father created a place for me to work and exhibit.  Even though it was on a small scale, I still managed to sell my works and interest grew. Seeing people pay for my works gave both my father and I a sense of pride.  Today I still carry these moments in my heart, and will never forget my humble beginnings.”

Be the first to review “Aissa Joud” Cancel reply