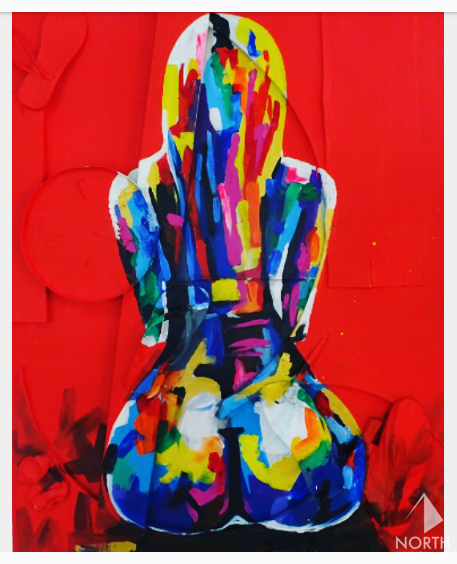 Serafim is from the capital city of Luanda, Angola. A port city located on the West Coast of South Africa.  Given its location, it was once one of the largest slave colonies of Portugal. Rich in natural resources, Angola’s waterways continue to be trade routes to the world.  Recognized for splendors like Luanda Bay, the Portuguese speaking capital is an urban sprawl that’s equally diverse in culture as it is in its history and contemporary landscapes.

One who studies the movement of humans, Serafim finds inspiration in the attitudes and behaviors of people in society.  Through the expressive language of human interactions, he creates an aesthetic of philosophical disciplines.  The language represents a visual manifestations of spiritual, moral, religious, and social values within society.

Heart-stricken by young models who endure body shaming or self-hate about themselves, Serafim also felt similar contradictions with positive self-efficacy.  He hated his body and even had thoughts of ending his own life. Feeling excluded and rejected as many have, he was able to recognize people were starving themselves to death both mentally and physically based on self-rejection.   Through his works, he looks to highlight the struggles plagued by millions and counter the social cancer that oppresses and destroys.

In his own words: “As an artist, I have a responsibility to promote culture. Acting as a teacher and student, I look to inform future generations about habits and customs of prior civilizations both present and ancient.  To me, Art is a form of love, peace, prosperity, entertainment, and freedom.  For more than half of my career, I have spent much of that time studying the human condition.  I’m moved to recreating unforgettable images of emotions both good and bad.  Moreover, after losing my mother, her death shifted my artistic focus to female illustrations which feel an emptiness I feel internally.”

Be the first to review “Serafim Yssolo” Cancel reply