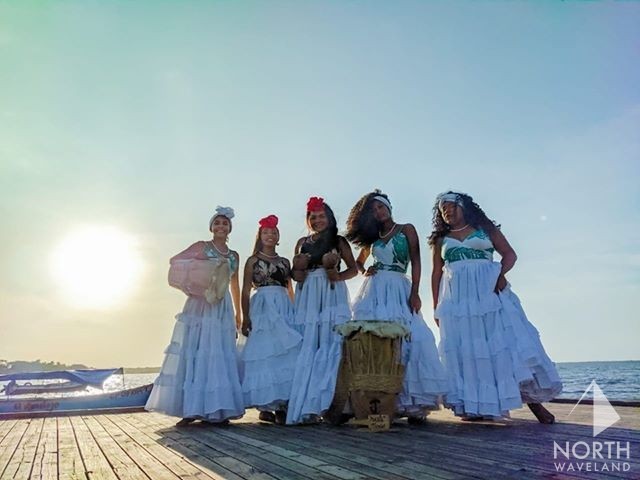 Mulata Tambó is an Afro-Colombian folk music group that features five young women with roots in the cities of San Pelayo, Montería and Bogotá, Colombia.  Known for being musically and artistically rich, San Pelayo is home to the annual National Porro Festival. As one of the region’s most popular events, the celebration features a showcase of artists including a performance in which over 400 musicians perform Caribbean rhythms at the same time. Just 40 minutes south, the city of Montería has received acclaim for its cattle-ranching culture and the popular Ronda del Sinú Park. The park is outlined with waterways that provide a front seat for viewing wildlife via water taxi.  A place that’s not just the country’s capital and largest city, Bogotá is also the country’s gastronomic capital which attracts visitors from around the world due to the many great restaurants, wine, and food festivals here.

Historically speaking, Colombia has been widely recognized for its many traditions and blended cultures including its African lineage which stretches back as far as the 1500s.  Gold, sugarcane, and livestock to name a few were all essential resources for  this region for hundreds of years and still continues to be an area of industry today.  Local communities called Palenques represent both African and Spanish ancestral roots in modern times. Today, Colombia is recognized for having the second largest African descendant population, with Brazil being number one.

From the outset, Mulata Tambó used their passion for learning to preserve the music of the Colombian-Caribbean culture.   Built on a foundation of a harmony-rich sound and exponents of traditional music, the young ladies push forward a musical legacy of the region. Through their art form they look to contribute to the transformation of culture and positively impacting social development by spreading a message of Peace, Love, Inclusion, Joy, Spontaneity and Equality.

Through their music and performances Mulata Tambó extenuates the many facets of femininity and empowerment.  In an era in music dominated by males and music that’s often synthesized, the group of women vocalist and percussionist present cultural messages that have a resounding connection to all in an uplifting way that promotes positive values.  Showcasing their sensitivity, mysticism, beauty, authenticity and femininity – the collective creates an atmosphere of emotions that’s memorable and everlasting.

In their own words: “We banded together on the campus of the University of Cordoba. Each of us studied art so we came in contact with each other often.  With a hunger to express our ideas, we wanted to do something that encapsulated our ingenuity and creativity.  Music allowed us to create in a way that allowed people to identify with familiar sounds and see themselves in the art form.  Today, we look to continue to add our contributions that preserve and spread Caribbean rhythms like the bullerengue, chalupa, cumbia, and puya with the help of bagpipes, drums and other instruments.  Regardless of our mulatto skin, hair, nose or whatever we are like that of a tambó—which is called to live and to feel.  We look for others to embrace this philosophy as well – Come as you are! What we do is a life project in many aspects. Every day we look to improve the quality of life of those around us and do it with professionalism, discipline and effective delivery.”

Be the first to review “Mulata Tambó” Cancel reply