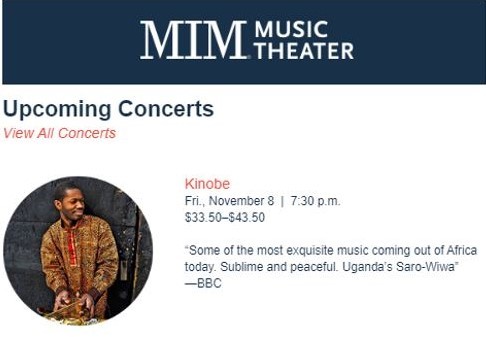 Kinobe (pronounced chi-no-bay) is a Ugandan singer-songwriter and multi-instrumentalist whose work has been described as “some of the most exquisite music coming out of Africa today” (BBC). For more than fifteen years, he has captivated audiences with his soothing African rhythms, understated vocals, and powerful world-roots-dance melodies that emanate from the diversity of the many traditional instruments he customized to develop his unique sound.

He has performed over one hundred concerts, often sharing the stage with other celebrated artists including Baaba Maal, Angelique Kidjo, Salif Keita, Youssou N’Dour, Oliver Mtukudzi, and Hugh Masekela. His latest album, The Voice Within, is quite different from all the others. Rather than offering a mix of traditional songs with intimate rhythms, all of the tracks on The Voice Within are original and tackle social and global issues dear to his heart, like love, diversity, economic development, and war—“but in a beautiful way,” he promises.

The release of the album coincides with Kinobe’s long-awaited 2018 North American tour, where he performs solo, as well as in an electrifying stage production alongside his “Dance of Hope” ensemble. The young troupe is made up of children he mentored in Ugandan orphanages and refugee camps.

As a creative arts producer, speaker, and facilitator, Kinobe has given talks and workshops all over the world and worked extensively with schools and colleges conducting residences and outreach exchange programs, which in most cases lead to commemorative concerts with local students.